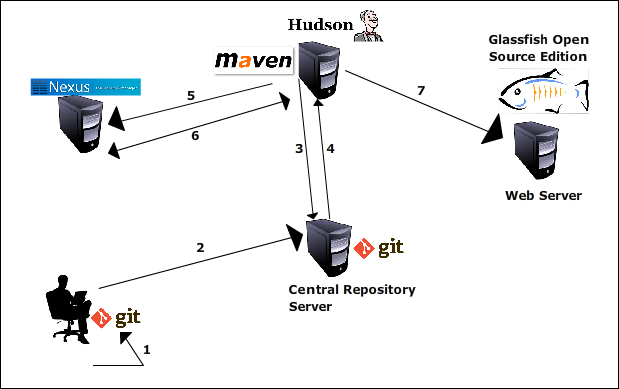 I am going to explain the above picture work flow, then we will look at each technologies in detail.
Validate - validate the project
Test - Test the compiled source code using a suitable unit testing framework. Test code is separated from source code. Its not packaged and deployed with source code.
Package- Take the compiled source code and packaged in to a distributed format, such as       jar/war
Integration-test - process and deploy the package if necessary into an environment where integration tests can be run
Verify- Run and check to verify the package is valid or not
Install - Install the package in to the local repository
Deploy- Done in release environment. Deploy the package in to remote repository for sharing   with developers or other projects.

1. Developer has git installed in his local system. Lets assume that he has completed the task, he issues git commit command to commit his current changes in his local repository.

2. He, then issues git push command to push his changes to the remote repository which is a centralized repository server where the source code version is maintained. Clients connects to this centralized version control server to clone, pull, commit, push their changes. To learn more about git command please visit http://git-scm.com/documentation

3. Hudson(Continuous Integration) server. CI main focus is to notify the users who breaks the build due to erroneous code changes. Its possible that developers sometimes commit and push their changes without proper testing. So, CI connects to our central code repository server and picks the latest changes periodically and verify the changes by running test against them. It can be configured to notify all the developers in case if the build breaks. As shown in the diagram, It connects to the central repository to fetch the latest changes

4. Picks the latest changes and validate, compile, build, package, install in to the local repository or notify developers in case of any failure

5. If build and release phase is configured in the pom.xml file, It performs a release and deploy the new version in nexus repository management server.

6. This step is performed to automate the deployment of new version release in our web application server. In this step, We have to create a script file and configure it to execute after a successful release in pom.xml. This script file main focus is to connect to the nexus repository and download the latest release.

7. Once the download is complete, script file automatically deploy the distribution war in our web application server(glassfish opensource edition).

Compile- Compile the source code of the project

pom.xml is the heart of any maven project. Its the file where we can configure the build phases, what to include/exclude in a phase, how to filter unwanted dependencies, and most importantly how to maintain the dependencies. Managing dependencies version is one of the most important aspect of maven technology. In early days, developers has to taken care of the dependency jar file versions manually. But maven simply eliminated that need and provided a framework to handle all dependency files versions automatically. If we put "LATEST" as the version under "<version>" tag, maven automatically fetches the latest version of that dependency from maven central repository. Its that simple.

Sonatype Nexus: Nexus is a repository management standard. It helps the developers to share the artifacts with other projects.

Hudson: Continuous Integration, CI is a technology to automate the build process. It periodically check the code changes in source code repositories with the help of SCM tags and validate, compile, test, build and install the distribution package in local repository. It alerts the developers in case of any build cycle failure.